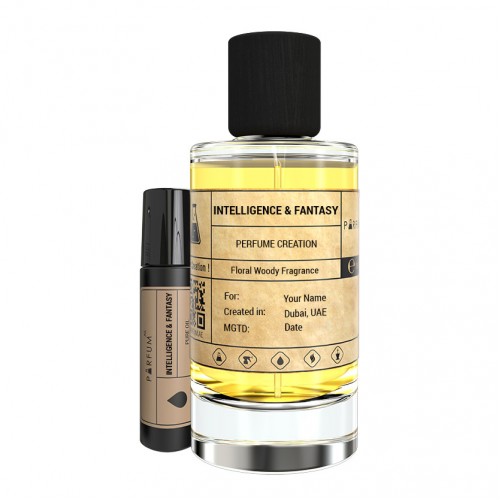 Intelligence & Fantasy
Our creation of

"Memory is infinite, nothing touches it like the sense of smell. For Volume 1: Intelligence & Fantasy, Schoen worked with Christiane Stenger, the youngest ever Grandmaster of Memory. “It was exciting for me to gain an insight into something as hidden as the sense of smell and the way it spontaneously triggers emotive memories“, says Stenger. For Schoen it was ‘amazing to watch Christiane use her extraordinary memory skills while we were working with the raw materials.” Stenger uses an ancient technique that requires both intelligence and a wild imagination. “Anything can be remembered,” she maintains, “so long as you embed it correctly in a crazy story, the more extravagant the better.” This extravagant side of memory skills is represented in the fragrance by absolute of tiare blossom. The tiare is a type of gardenia native to Tahiti, rarely used in quantity due to its prohibitive cost. “Unlike many absolutes,” says Schoen, ‘absolute of tiare smells like the living bloom itself. It’s very special, very exotic.” Tiare’s creamy sensuality is lifted by an abundance of luminous top notes such as magnolia bud, hedione (the greener, less sweet side of jasmine) and bergamot. Schinus molle (pink pepper), something of a Schoen signature, adds a spark of spiciness. The drydown is soft and woody, with cashmeran, sandalwood, cedar, and light musk. The new packaging for Intellligence & Fantasy is an imaginative recreation of the web of neural connections that explode into life when Stenger is performing a memory feat. As Paul White of Me Company explains: “It’s a visual representation of memory, to which the play of colour adds the element of fantasy that is essential for creative thought." - a note from the brand. Volume I Intelligence & Fantasy was launched in 2010. The nose behind this fragrance is Geza Schoen.