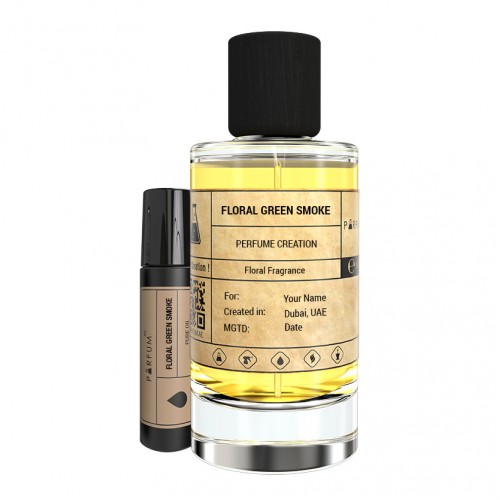 Floral Green Smoke
Our creation of

Diorissimo is a romantic fragrance of the 50’s. At its heart, a gentle lily of the valley, blooms as Dior’s favorite “fortune” flower. Diorissimo is fresh and clear, just like a dewy, spring morning in the woods. Top notes include lily-of-the- valley and ylang-ylang, the heart is composed of amaryllis and boronia, leaving a jasmine trail. Christian Dior believed that lily-of-the valley is the symbol of hope, happiness and joy. French consider lily of the valley as the legendary flower. According to the legend a brave and fearless fighter, called Saint Leonard wanted, to spend his days among the flowers and trees and live a life dedicated to God. He asked permission to go live in the woods. A dragon called Temptetaion lived in those woods. They fought and blood was spilled. Leonard bravely fought the dragon until it was defeated. Poisonous weeds began to grow where the dragon spilled his blood, but beds of lilies of the valley started to grom wherever the ground was moistened with Saint Leonard's. The French believe that lily-of-the valley is a holy flower and so did Christian Dior whichinspired the creation of this wonderful fragrance. The creator from Grasse, France, Edmond Roudnitska, wanted to create a perfume that would be revolutionary and break the trend of sweet perfumes that were dominating the market. The goal was to simplifie perfume’s formula and create a perfume that’s simple and luminous. He dreamed of perfume similar to that of muguet that enveloped his senses when he was resting in his garden. Dior and Roudnitska met in 1955 and made their dream come true in 1956- Diorissimo was created!The perfume was represented by an illustration by René Gruau.According to Christian Dior, Diorissimo is the perfume of his spirit, or, "the scented expression of his soul".